A little humor - How does wellness impact IT?

Not all calls that come to the IT service desk can be solved with technology. This is a true story about someone I know. 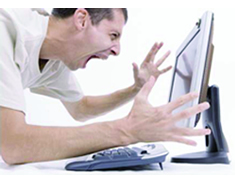 Jason was very upset when he called the IT service desk to report a problem with his computer. He said that randomly, while sitting at his desk, the computer would start making beeping sounds and the cursor would jump all over the screen. It was hurting productivity and he was convinced he had a virus. The service desk ran some remote diagnostics on his computer. All appeared fine. The problem had stopped just before the call so the service desk asked that he call back if it occurred again.

Two weeks later the symptoms appeared again and Jason called the IT service desk. They tried some additional diagnostics, replaced his mouse and keyboard, and ran some software updates. No matter what they did Jason would intermittently have the same problem over the next several months. His frustration was increasing and after several more phone calls to IT, they finally decided to replace his computer with a brand new unit. All was good for the next few months.

When the problem reappeared, Jason was livid. The cursor was speeding across the screen and the computer was beeping again. That was the last straw. He was going to escalate this to someone in charge. As he placed the call he realized that his belly was resting on the space bar. As he leaned back, the beeping went silent, the cursor stopped moving. When the IT serve desk answered his call, Jason asked them to close the ticket. To his credit, he told the service desk what he had discovered.

It was time to go on a diet and start to exercise.
Posted by Mark at 4:00 PM